An Oxford Brookes University lecturer has won an award for her work to support vulnerable court users during the Covid-19 pandemic.

Dr Emma Rowden, a Senior Lecturer from the Oxford Brookes School of Architecture, was part of the Supporting Online Justice Project team, which helped people whose court hearings were  moved online during the pandemic.

Dr Rowden joined colleagues from the University of Oxford’s Centre for Socio-Legal Studies, Professor Linda Mulcahy and Dr Anna Tsalapatanis. The team won an Oxford University Vice Chancellor’s Innovation and Engagement Award for their work, which was funded by UK Research and Innovation (UKRI).

Dr Rowden said: “It was a hugely rewarding project to be involved in from beginning to end, and the team were absolutely thrilled to be honoured in this way with this award.” 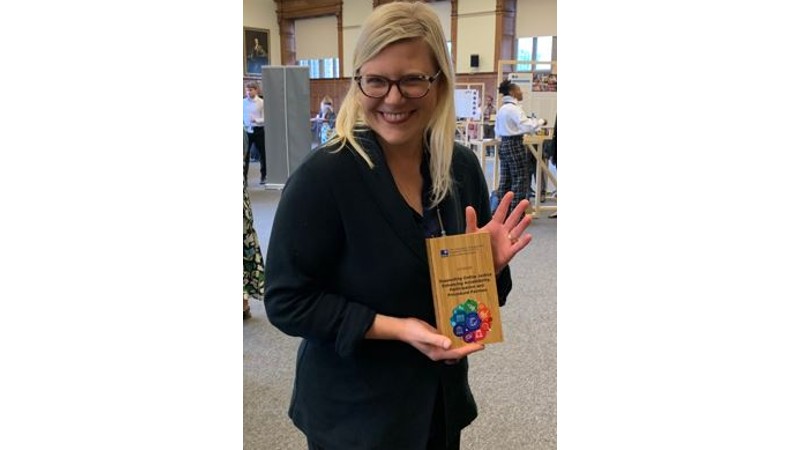 The research group worked with HM Courts and Tribunals Service (HMCTS) and representatives of different judiciaries as part of an intense cycle of consultation, research and refinement, which ultimately led to the production of five public information films, designed to assist people before their court appearance.

Dr Rowden played a pivotal role in the design, editing and production of the films, which were launched in March 2022 and are available to view on the HMCTS YouTube channel.

Judge McConnell from the Special Educational Needs and Disability (SEND) Tribunal said: “The Oxford team chose our tribunal as the subject of their prototype film and we have worked closely with them over a period of 18 months. The team had undertaken extensive research into the SEND tribunal when they first approached us but listened closely as we informed them of the culture of the tribunal and regional variations in style. This attention to detail shows in the films produced. We were absolutely delighted by the films which we are busy promoting. The advice given to litigants and the way in which it is given have raised the bar for films of this kind.”

Since the launch of the films for use in England & Wales in March 2022, the team were contacted by Scottish judges with a request for the films to be edited and adapted for use in Scotland, which was successfully completed.