Rhian Taylor at the Cheerleading Worlds

Oxford Brookes student, and member of the TEAMBrookes Cheerleading and Dance club, tells us about her experience as part of Team England taking part in the Cheerleading Worlds.

I’m Rhian Taylor, 22 years old and a third year Education Studies student at Oxford Brookes University. I’ve been dancing in all styles since the age of 2.

From a young age I was given to opportunity to compete up and down the UK and was fortunate enough to carry on my training at a vocational level at the Henley College where I then received a diploma in Performing Arts. When first considering university the only option to a younger me was a vocational dance/performing arts school. At the age of 18 I successfully auditioned and received offers from the top 5 institutions in the country. However I was then offered a job teaching dance and decided to take that route instead - I enjoyed it so much that I was then led to my course in education studies.

Getting into the cheer side of dance was completely unexpected. I actually only started cheer when Brookes created a Pom team in 2020. We all know that 2020-2021 was the year of lockdown which for us meant zoom training. We were very lucky as a team and mostly through Instagram were able to train with some incredible industry professionals, including a workshop with Jodi and Tash who coach Red Hot Flames and Team England (we have been fortunate to work with them further this year and they are truly some of the best in the business!). They mentioned Team England briefly at the end of their zoom and straight away I sat there and told myself I’m going to do that.

Being completely honest, I was expecting not to make the team in the first year auditioning because at the beginning of lockdown after not dancing at that high a standard since leaving college and my skills were not as ready as I was. 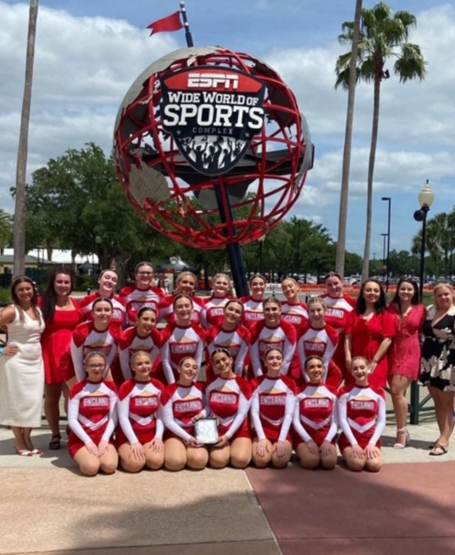 Throughout lockdown I worked every day, waking up, working out for strength training and then doing at least 2 classes a day, making the most of every single opportunity I could find. Whilst doing this, I also discovered Sparks who are an All-star team based in London and who ended up becoming my second family. They provided amazing training over zoom and then in person as the world opened up and then I competed as part of their international open Pom, Jazz and Lyrical teams. They taught me everything I know about this sport and I could not be more grateful to have had a successful season with them.

This past season at Brookes we were able to really develop Cheer so that it is now known as Cheer and Dance! I’m thrilled that I was able to be involved as the first dance Vice President within the club and help lead the new Pom, Jazz and Hip Hop teams in their unbelievably successful first season - with Pom and Jazz both becoming National Champions as well as Pom receiving the only Grand Champion title of the season. Coming out of the pandemic we were lucky to have such a high standard of athletes and together as teams worked so hard whilst having so much fun along the way. We had an incredible team of professional coaches and captains that it was a pleasure to learn from and I hope the legacy we have begun will continue for many years. I was also a Brookes Sport scholar this year and that continued support from Brookes is such an aid whilst trying to juggle everything that comes with being an athlete.

As I said previously I was really not expecting to make Team England’s Pom team when I tried out. I had only competed at my first cheer competition with Sparks in July ‘21 and the try-outs for Team England were in August! I tried out whilst still being so new to the sport and so went in with a completely open mind just hoping to gain some experience, put my name out there and get some feedback. So I’m sure you can imagine the sheer shock when I opened the email to say that I had received a spot on the team for the 2022 world championships…

I cried for at least an hour. Training started in September and I was inspired from the first minute I stepped into the studio with the team and the coaches. They all made my first Worlds incredible and I will be forever grateful for that. Nat, Shannon, Amy, Em and Tori (the coaches) were a joy to learn from and I consider myself lucky every-time I so much as think about the experience this year. The team had athletes that travelled from all over the country and because of this we only trained in person once a month for a few hours. Aside from this we are set weekly videos to complete to help with fitness, strength, technique and the overall routine. We did two showcases in the UK and before we knew it we were flying to America to compete. 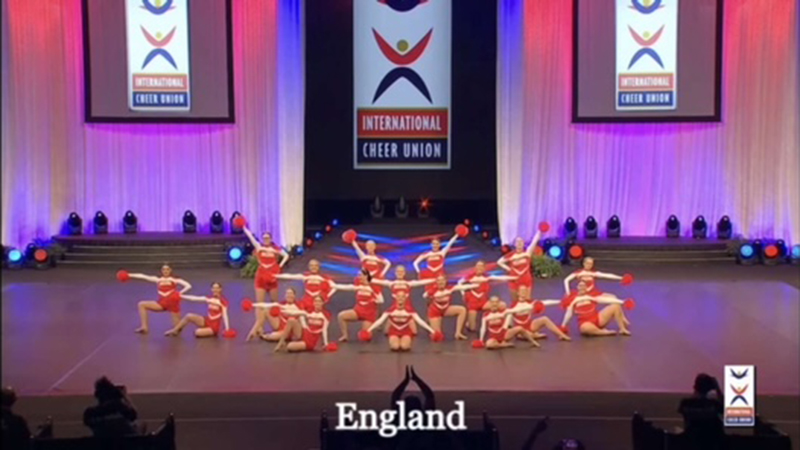 Worlds is hosted at ESPN, which is part of Disney in Orlando, Florida. It is an experience that is unimaginable. Within the week spent there we had the opportunity to watch so many other amazing countries (I think some of my personal favourites were USA, Sweden and Mexico). We trained in Disneyland, had team days at the parks where they helped me challenge my fear of rides and of course got to finish the week watching the fireworks above the castle.

Competing on that stage is an unforgettable experience. The arena is large and loud and knowing you have your county behind you is indescribable. You are able to walk around and see people that you have only ever aspired to be like, and now they are considered competition. Putting on the uniform on competition day with England written across my chest is the proudest moment of my life so far. Warmup however was probably the most nervous I have been in my life. All I remember is doing a run of the routine and seeing the USA jazz team watching us (if you are a dance fan you know that they are the definition of perfection) and it was what I can only describe as a pinch me moment. We had our team talk and then it was time.

Performing was a blur of pure joy. As soon as that music finished the emotion overwhelms you and as a team we cried more than you could believe because we were so unbelievably happy. When it was time for awards we were the grateful recipients of a bronze medal, 3rd in world is a sentence I never thought I would be able to say. It was the best performance we had put out as a team all season and to have peaked on the Worlds stage where it all mattered was all I could have ever wanted and more.

The season is about to end which marks a full year in the sport for me. My team placement for next season is at Cheerforce Ten on their international open Pom and Lyrical teams. Both of which have already received bids to the World Championships 2023. Another year of competing with Team England is also a goal right now however I will not know whether I have made the team for a second season until later in the year. So the overall plan for right now is to just keep studying and training and keep working towards being the best I can for the upcoming season.