Where We Begin to Look

With drawings and paintings by Zoe Benbow (Associate Lecturer in Fine Art at Oxford Brookes in 2010-11) and poetry selected by Deryn Rees-Jones, poet and academic (shortlisted for the T.S. Eliot Prize, 2012 and Welsh Book of the Year, 2013 for Burying the Wren). 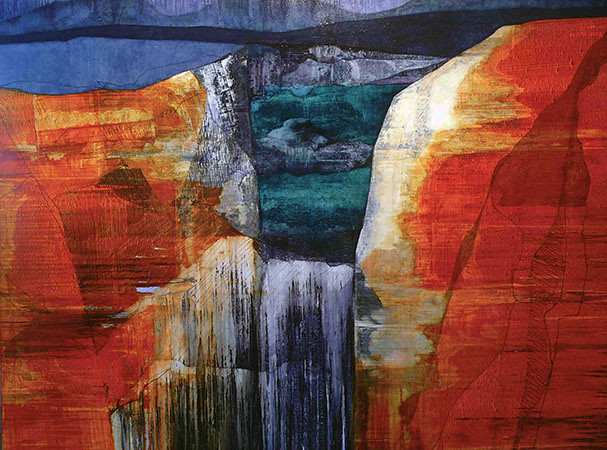 Water, sky, earth, coast. No landscape exists out of context: like anything else landscape is as subject to the effects of time, culture, power, ownership and ecology as it is to its poetical, historical and gendered constructions. Zoe Benbow’s pictures, made in situ, as she engages with, and places herself in the reality of the landscape – its weather, and the shifting light which makes impressions on the contours she temporarily inhabits rather than simply regards – evoke what she has described as ‘an abstract geological landscape developed from direct experience in remote environments’. The move towards abstraction for Benbow is also a movement between conscious and unconscious worlds and she has described her method as being ‘as much a meditation on a geology of association and memory as of actual place’.

Set here in lively conversation with a range of poems by British and American women chosen by poet Deryn Rees-Jones, important questions are asked in the ensuing dialogue about the relationship between, and the construction of, the female self and the natural world. Although the poems are largely written by Benbow’s contemporaries, by way of context they are framed by the work of three important poetic predecessors: Charlotte Smith (1749-1806), Emily Dickinson (1830-1886) and Sylvia Plath (1932-1963). As in Benbow’s work, all the poems, in their differing ways, address ideas of scale and perspective, the relationship between the micro and the macrocosmic, and the process of looking itself. The cumulative effect asks that we readjust the focus of our eyes, and in doing so also find new focus in our imagination.

You can read more about Zoe’s work on her website, and more about Deryn’s poetry and research on her page at the University of Liverpool.

To tie in with this exhibition, the Poetry Centre hosted writing and painting workshops with Sarah Corbett (whose poetry featured in the exhibition) and Zoe Benbow. It also organized a reading by Sarah Corbett and Deryn Rees-Jones, and a panel discussion about the exhibition with Zoe, Sarah, Deryn and the Director of the Poetry Society, Judith Palmer. Where We Begin to Look first appeared at the Poetry Society’s Poetry Cafe in London in 2013, and the Society sponsored the touring exhibition, which also visited Organic House, Hebden Bridge, and the Norwich Arts Centre.

Sketches from the Poem Road

(after Matsuo Bashō’s The Narrow Road to the Deep North)

A collaboration between Japanese artist Isao Miura and poet Chris Beckett, presented to the Glass Tank by the Oxford Brookes Poetry Centre. Shortlisted for the Ted Hughes Award for New Work in Poetry, 2015. 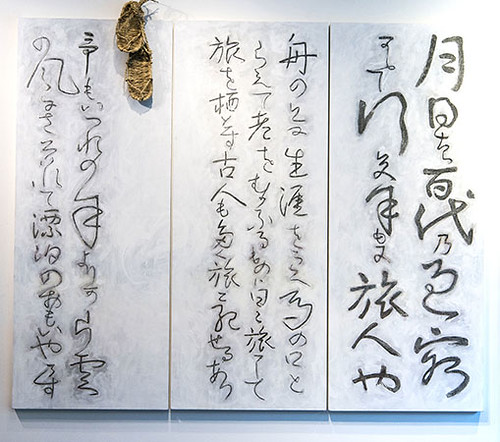 In spring 1689, Matsuo Bashō sold his house in Edo (now Tokyo) and set off with his friend, Sora, on a long risky journey to the north of Japan, mostly on foot. He travelled light, with just a paper coat, light cotton gown, his writing brush and ink. His aim was to see the great northern sights like Matsushima and Kisagata Bay which had inspired poets before him, a journeying process the Japanese call ‘uta makura’, literally ‘poem pillow’, but more accurately translated as ‘the poem road’. This exhibition explores the rich legacy of Bashō’s work, both visually and poetically, and it documents some of Isao’s artistic and physical journey from the deep north of Japan where he grew up, ‘translating’ Bashō’s text not only into English words but into sketch, plaster, and bronze.

Sketches from the Poem Road was first shown in the Poetry Cafe at the Poetry Society in 2015. There is a book, published by Hagi Press, to accompany the work by Isao Miura and Chris Beckett, and more information about this and the ongoing project can be found at: http://afterbasho.weebly.com/

The exhibition was accompanied by a number of free events, listed below. These included: a discussion at the Daiwa Foundation about Bashō and the artistic journey; a walk around Oxford emulating Bashō’s pilgrimage to different places associated with famous writers, ending with the writing of a collective haibun; a translation evening; and a visit to the Ashmolean Museum in Oxford to examine artefacts related to Basho and the Narrow Road.

‘Artist Talk’ with Nathalie Aubert, Isao Miura, and Chris Beckett discussing the exhibition and the influence of Japanese calligraphy in modern art. You can watch the talk on the Daiwa Foundation’s YouTube channel.

A chance to emulate Bashō’s type of literary pilgrimage and write your own haiku and haibun (a combination of haiku and prose) along the way.

Wednesday 6 July, 10am: Bashō at the Ashmolean

A special workshop in the Ashmolean Museum and the Glass Tank at Oxford Brookes.

Tuesday 12 July, 6-8pm: Bronze and the Art of Translation

A stimulating evening of talks and discussion on the subject of artistic and literary translation, with John Nicoll, Nathalie Aubert, David Constantine, and Thomas McAuley, chaired by Niall Munro, Director of Oxford Brookes Poetry Centre.