Whether you are joining us in person or virtually, there are lots of things to see and experience in Oxford. Explore the information below, take a virtual tour and discover the city of Oxford.

Oxford in Film, Television and Books

In this trilogy of books written by Philip Pullman, the central character, Lyra, is left in scholastic sanctuary at Jordan College in Oxford. It's believed that Jordan is based on Exeter College where Pullman studied.

You can take a virtual tour of Exeter College, or, if you're currently in the UK, you could watch series one of the television adaptation His Dark Materials on the Library database Box of Broadcasts.

Philip Pullman was a Fellow on the Oxford Brookes University Creative Writing MA when it began in 2008, and has since been back at Oxford Brookes for a talk about his novel, La Belle Sauvage.

Although originally a character from a set of novels by Colin Dexter, Inspector Morse is now probably best known as an on-screen detective.

Since 1987 when the series first came to UK TV screens, Oxford residents have been keeping an eye out for their favourite Oxford locations (and even themselves, if they've managed to sneak into shot), first in Inspector Morse and, more recently, in the spin off series Lewis and Endeavour.

If you're currently in the UK, you can watch episodes of all three detective series on the Library database Box of Broadcasts.

Morse fans can walk in the detective's footsteps on an Inspector Morse Pub Crawl.

In one of the city's biggest film roles, it stars not as Oxford, but as Hogwarts in the Harry Potter films.

Filming locations for Harry Potter are mostly inside the Oxford colleges. You can tour the colleges virtually using the links in the Oxford Landmarks section below.

Scenes were also filmed inside the Bodleian Library where some Oxford Brookes students can apply to study.

If you're currently in the UK, you can watch the Harry Potter films and behind the scenes documentaries on the Library database Box of Broadcasts.

CS Lewis was an Oxford academic and writer most famous for the series of novels The Chronicles of Narnia.

If you're currently in the UK you can watch The Chronicles of Narnia: The Lion, the Witch and the Wardrobe on the Library database Box of Broadcasts.

CS Lewis founded a literary group called the Inklings. The group met and wrote in Oxford in the 1930s and 1940s, often in the Eagle and Child pub.

Read more about the Inklings in this Library ebook.

Lord of the Rings - JRR Tolkien

JRR Tolkein was a member of Lewis' Oxford literary group. The Lord of the Rings was one of the unfinished manuscripts the group discussed and debated.

Enter into the philosophical discussion in this Library ebook.

Tolkien's Lord of the Rings attracted an even wider audience when Peter Jackson transformed the trilogy of novels into films. You can read more about this adaptation in the Library ebook, From Hobbits to Hollywood.

In nineteenth century Oxford, author Charles Dodgson, better known by his pen name Lewis Carroll, met the 10 year old Alice Liddell. He told Alice a story which she made him write down.

Read Alice's Adventures in Wonderland as an ebook through the Library.

Founded in 1683, the Ashmolean is the University of Oxford's museum of art and archaeology.

Thanks to their Digital Collections programme you can now view 25% of the Ashmolean's permanent collection online. And you can even attend exhibitions as part of their Ashmolean from Home initiative.

Modern Art Oxford is a free public gallery in the city, dedicated to promoting diversity and internationalism through contemporary art and culture. As well as the constantly evolving physical collection, they have online exhibitions, some of which are interactive so you can participate in the creation of artworks from your own home.

The Neo-Gothic architecture of the Oxford University Museum of Natural History makes an interesting backdrop for a Tyrannosaurus Rex.

You can see for yourself by taking a virtual tour of the Museum of Natural History.

Pitt Rivers is a museum to get lost in. It's an eclectic collection of world treasures and is unconventionally organised around the type of object rather than it's geographical origin or time period.

You can go on a virtual tour of the Pitt Rivers museum from home.

Or you can explore the individual Pitt Rivers collections.

The Oxford skyline is so important to the city that views of the spires are protected from development.

There are designated viewpoints around the city which must be kept clear of new tall buildings, so that the view can be preserved for future generations. A couple of these viewpoints are very near Oxford Brookes campuses.

The Oxford View Cones Study shows you maps of these protected viewing 'cones' and the views they protect.

The city centre is full of the University of Oxford college buildings, but most of the time you only see the outside as you're walking, commuting or shopping.

These college virtual tours let you go beyond the porter's lodge.

Just outside the city is the World Heritage site Blenheim Palace.

It was once home to the former British Prime Minister Sir Winston Churchill, but that's only part of its 300 year history.

You can glimpse into the palace state rooms from home.

It isn't just the palace that visitors flock to see, but also the "finest view in England". The parkland around the palace was landscaped by the famous landscape architect Capability Brown.

Oxford has its very own Bridge of Sighs.

It's much smaller than its namesake in Venice and looks more like the Rialto Bridge.

The bridge's real name is Hertford Bridge as it links the two parts of Hertford College.

If you do watch the film before seeing the bridge in real life, don't be disappointed by the lack of a pub in the vicinity. The pub frontage was just constructed for filming.

The Oxford Martin School webcam gives you a live view of Broad Street.

Broad Street is at the heart of the city and home to Blackwell's bookshop, two Oxford Colleges and the Sheldonian Theatre.

This Oxford Internet Institute camera looks towards the University of Oxford's European languages library and, to the left, the famous Randolph Hotel.

Oxford is surrounded by countryside. Some of this land is protected from development and forms a green belt around the city.

The Oxford Green Belt Way walking route was created by the Campaign to Protect Rural England, Oxfordshire in 2007.

You don't have to do all 50 miles in one go. The walk is broken down into sections which are all accessible by public transport.

A series of YouTube videos are currently in production which let you walk the Green Belt Way virtually so you can see the views and special places of interest without leaving home.

You could start walking in Oxford city and walk 77 miles to Coventry along the canal towpath.

The Canal and River Trust provide free maps and guides for the whole of the route.

Alternatively you can experience the canal on a narrowboat without ever leaving home.

The arrival of the month of May is celebrated in the city, closing much of the city centre - but only until breakfast.

Although much of what happens is unplanned, there are some typical May Morning events.

Every year since 2009, a festival of lights and entertainment has warmed the streets of Oxford every winter.

What began as a one night event now takes place over 3 days.

Sadly Crocfest UK seems to have been a one off event in 2016. But this interview with the Crocfest organisers gives an insight into the event.

Not many people know that 150 crocodiles live just half an hour away from Oxford city centre.

Crocodiles of the World is the UK's only crocodile zoo and they are one of the participants in the Oxford Brookes University Science Bazaar.

Science Bazaar is an opportunity for Oxford Brookes staff and students to show local children how much fun science can be.

The annual Cowley Road Carnival is one of the highlights of the Oxford year.

The team who organise the Carnival are Cowley Road Works.

Here are some highlights from past carnivals. 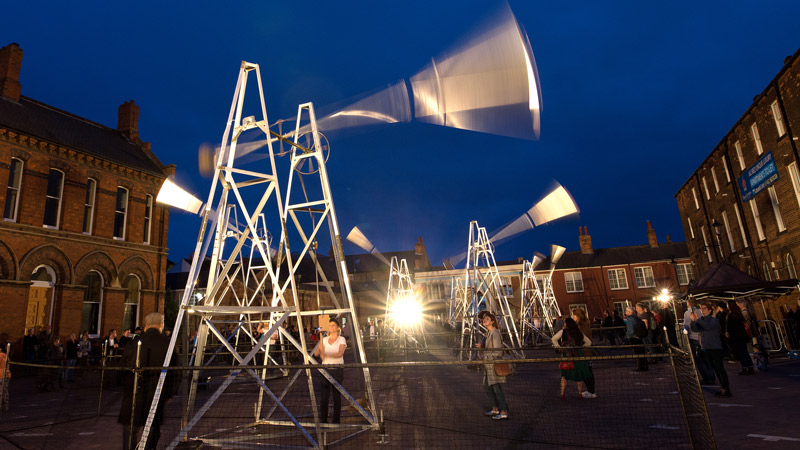