Full time: 3 years, or 4 if a work placement is chosen

School of Engineering, Computing and Mathematics

Our Computer Science for Cyber Security degree helps you develop your practical expertise. You will gain experience using high-end professional equipment and software tools and learn:

Our state-of-the-art cyber security networking and server laboratories offer excellent facilities where you will:

You can take a placement year in industry, and you’ll work on a dissertation investigating a current issue or problem in cyber security. You can also study for your CISCO CCNA professional qualifications.

There is a shortage of skilled graduates in Cyber Security and it's regarded as a critical area by business and government. Careers include IT professionals, penetration testers, digital forensic investigators, software developers, systems engineers and technical analysts. 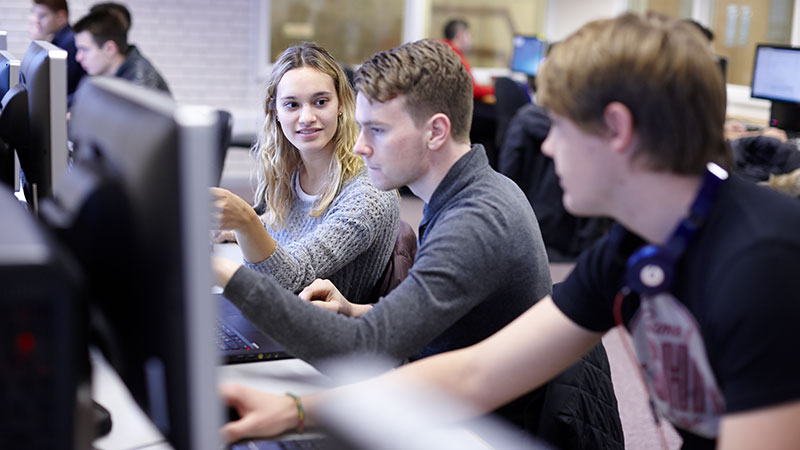 What is a contextual offer?

We welcome applications from candidates with alternative qualifications, and from mature students.

If you don't know about Computing already our first year modules will quickly get you up to speed. Any previous experience you have might help you to get started more comfortably but even if you think you know a lot about computing already there will still be many new things for you to learn.

Having an A-level or BTEC Level 3 qualification in a computing-related subject will not exempt you taking any first-year modules, as we want to make sure that we give you a quality introduction to all of the relevant topics.

If you don't have the right qualifications to apply for a place on one of our degree courses, we may be able to consider you for our Computing Foundation course. This course, which lasts one year, is an excellent preparation for any of our computing degree courses.

We are keen to consider applications from all parts of the world. If your previous education was not in the UK, please contact us if you would like us to consider your entry qualification.

If you do not meet the entry requirements for this degree, or if you would like more preparation before you start, you can take an international foundation course. Once you enrol, you will have a guaranteed pathway to this degree if you pass your foundation course with the required grades.

If you only need to meet the language requirements, you can take our pre-sessional English course. You will develop key language and study skills for academic success and you will not need to take an external language test to progress to your degree.

Many of our courses consider applications for entry with credit for prior learning. Each application is individually assessed by our credit entry tutors.

If you would like more information about whether or not you may be eligible for the award of credit, for example from an HND, partly-completed degree or foundation degree, please contact our Admissions team.

Oxford Brookes University intends to maintain its fees for new and returning Home students at the maximum permitted level.

The most likely extra costs involved in studying this course are computers, books and printing.

You are not required to have your own computer though many students choose to. We have computer rooms available 24 hours a day and 7 days a week on campus, so you should always be able to work if you don't have your own machine. Students who choose to buy a computer are advised to avoid low-end machines since reliability will be important; a budget of around £700 should suffice, although some modules may require use of higher-end hardware which is available on campus. The Department does not provide any Apple MacOS machines and their use is not required, but their use is supported if you wish to bring your own. Linux machines are used on the course and you are advised to choose a machine that will support the use of Linux Virtual Machines. If you wish more detailed advice on machine specifications, the department will be happy to advise.

Most software used on the course is freely available to students. The Department is a member of the Microsoft Imagine scheme, the VMware Academic Program and other programs designed to grant access to professional-grade software tools, which would normally be very expensive, for free.

Your University library membership includes access to an extensive electronic library so in many cases, you will be able to read coursebooks online without extra cost. You can of course buy physical copies of books as well if you wish. Computing textbooks generally vary in price between £20 and £60 depending on the degree of specialism.

Most submission of work for Computing modules is electronic, so there is little need for printing.

In Year 1 you will study fundamental concepts in networking, computer systems and computer programming.

You will build on these subjects in Year 2 and your final year. You'll also learn about:

There are optional modules in IT management and programming.

In the final year, you will study advanced topics in aspects of cyber security, operating systems and networking. Central to your final year is a major project that allows you to try out your knowledge and skills on a real-life problem of your choice. It will also give you the opportunity to enhance your networking skills. 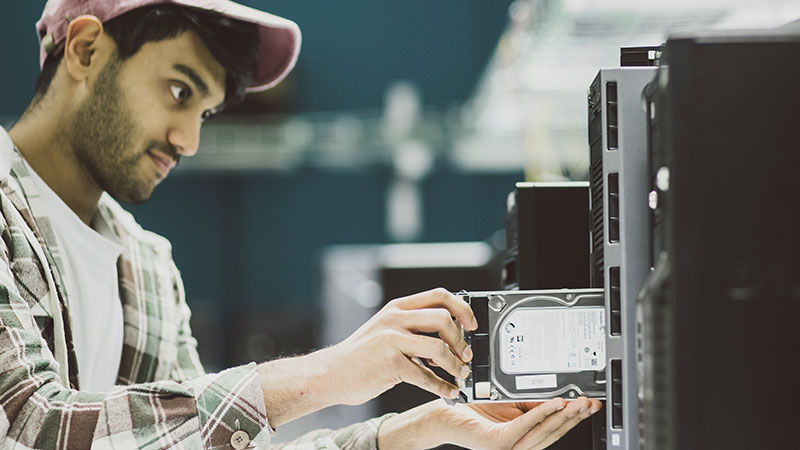 An introduction to programming

An introduction to core computing concepts such as binary, how key hardware components function, and logic

An introduction to notions of computation, computability, automata, and related topics

An introduction to C and C++ programming

We encourage you to take a supervised work placement for 12 months between Year 2 and your final year. You will need to apply for your placement yourself; however you will be taught about how to apply for jobs effectively in a second year module, and we have dedicated placements staff to support you with securing a placement. We maintain links with industry and most students who go on placement obtain their position through the Department. More and more students are finding that a placement benefits their final year studies and career prospects. Possible placement organisations include IBM, Ericsson and Cisco. Your tuition fees are reduced for the placement year and the positions are normally paid which should cover your living expenses. Current placement costs are available in the Fees section of this page. Students are responsible for living and travel costs associated with their employment on and as a result, most will live near their placement location.

The design, implementation, and maintenance of secure software systems

A project in the area of cyber security.

This course focuses on the technical aspects of computing and how they relate to cyber security. There is a strong focus on using real world problems to learn the skills and techniques needed. Many of your modules have a large practical, hands-on element to reinforce the taught material.

Lecturers and technicians are approachable and will often help you on a one-to-one basis if you have difficulties.

Each 15 credit module has 150 learning hours associated with it. 36 of these hours (3 hrs x 12 weeks) are formally scheduled teaching.

Some of our core programming modules are taught in an apprentice style. This format involves a 3 hour session where:

Assessment methods are varied and reflect the development of academic content as the course progresses. From the practical emphasis of some of the early modules to the more conceptual content that you will encounter later in your degree. The modules covering core material are mostly assessed on a combination of coursework only, or coursework and examination.

You may be able to go on a European or international study exchange while you are at Brookes. Most exchanges take place in the second year. Although we will help as much as we can with your plans, ultimately you are responsible for organising and funding this study abroad.

On registering for training under the networking academy scheme you will be given access to extensive, professionally developed on-line learning facilities, including network simulation tools, testing and feedback systems. The training is incorporated as an optional integral component of the degree course.

It is no longer acceptable to develop, and deploy, IT systems and software without significant consideration of security issues and the UK Government's National Security Council identifies cyber-attack as one of the 4 highest priority risks for the UK. In particular, they highlight the lack of computer science graduates, with the necessary skills in cyber security, as a serious concern for both government and industry, with demand far outstripping supply. Our degree in Computer Science for Cyber Security is designed to help address this need. Potential careers in this area include careers such as IT security professionals, penetration testers, digital forensic investigators, software developers, systems engineers, technical analysts, IT managers, and consultants.

World-class research and superb links with industry come together to make Oxford Brookes one of the best places in the UK to study technology at postgraduate level, whatever your subject interest.

Our courses, taught by leading academics with active research programmes, are designed to meet the needs of modern industry. And our location in Oxford places us at the heart of one of Europe's biggest concentrations of high-tech businesses - opening up opportunities for research collaboration and employment.

Learn more about our postgraduate courses.

Free language courses are available to full-time undergraduate and postgraduate students on many of our courses, and can be taken as a credit on some courses.